Our 2D to 3D conversion software creates realistic looking volumetric 3D from original flat 2D bitmap images. Whether this is partial elements or a complete photograph, if you want a realise your work in volumetric 3D lenticular, then our 2D to 3D software is for you. It can be anything from a landscape extending from the foreground into the background depth of the picture, lettering floating freely suspended in space or a football really looks like a football ... it is usually the result of a 2D to 3D conversion.

You can create depth maps manually in an image editor of your choice and import them into the program or create them directly in the editor using the software-internal painting tools. A real-time preview in animation or as a 3D anaglyph image shows the progress of your work.

Suitable depth maps can basically be generated from all sources that provide Z information as an image or data from among other things 3D scanners, stereometric measuring systems, satellite radar maps, laser microscopes, as well as from the Microsoft Kinect depth sensor, from light field cameras or smartphones of newer generation. The following image was taken from the photo and the depth map is from a Raytrix light field camera. 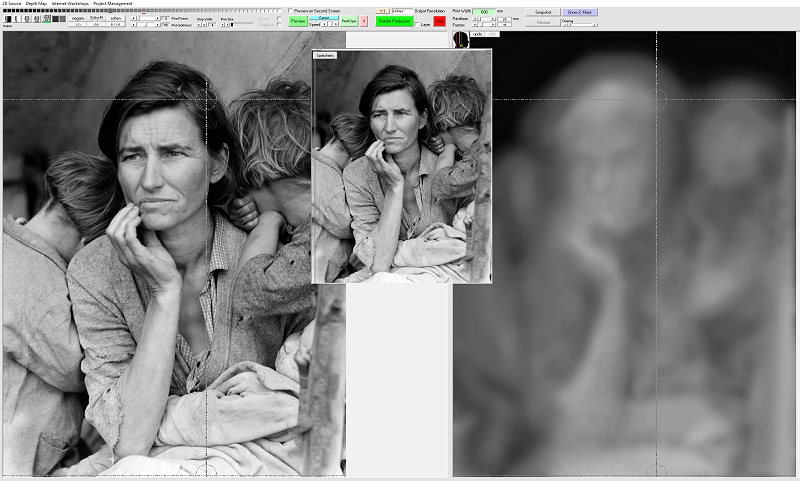 The 2D to 3D converter generates photo-realistic, volumetric 3D data sets from any 2D image source with the help of a depth map (Depthmap).

"Depth maps" or "Depthmaps" contain (in the form of a black and white image) information about the spatial conditions of an object surface. According to the information of the depth map, a 2D sequence is created from the 2D template, just as it would be if one were to drive past the object with a camera on a rail and take pictures at regular intervals. This image sequence is loaded into the 3DZ v7 lenticular software where the frames will be processed according to set parameters, just as they would be with any other image sequence.